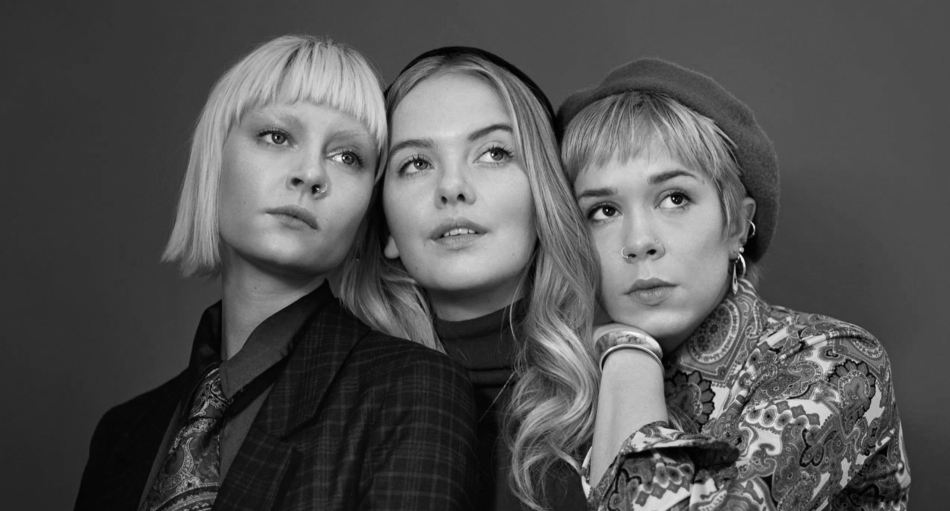 First a fictional band with a mockumentary, Dream Wife are now a fully fledged pop trio with a punk edge. Just don’t call them a “girl band”

It’s an unseasonably hot day in April. Rakel Mjöll, Alice Go and Bella Podpadec – the trio known as Dream Wife – have momentarily slipped out of this year’s
Flying Vinyl Festival, where they will later play an energetic set to a crowd of beery, sun-soaked revellers. Bassist Bella’s kaleidoscopic, ever-changing hair is orange, and the band’s chain-smoking, effusive guitarist, Alice, has matched her bleached-blonde bob with an all-white outfit, offset with heavy black boots. We look for a quiet spot not too far from the venue and end up settling down by a litter-strewn canal. Vocalist Rakel fans out her striped sundress across the steps. Between them, they make even the nearby sweltering middle-aged fishermen look glamorous by mere association.
The trio have just returned from playing South by Southwest (SXSW) festival in Austin, Texas, and they’re still stunned at how well it went. “I don’t think there was one moment where I felt that I wasn’t thoroughly enjoying myself,” says Rakel. “It’s hard to believe that week was real,” agrees Alice. “It was a whirlwind. Sometimes we were playing three shows a day, and it was so hot and physically demanding. But by the end of the third show, we would still be buzzing. It didn’t feel like hard work at all.”

When they began, Dream Wife didn’t plan to come this far. The trio formed at a Brighton art school in 2015 when Alice and Bella, friends from back home in Somerset, met Icelandic Rakel. Together, they devised the band as a spoof performance-art piece. They named themselves after a 1953 Cary Grant romantic comedy, made their own Spinal Tap mockumentary and put on a live gallery show. Somewhere down the line, everything seemed to fall into place. Dream Wife have since transitioned from an art school performance gag into a real-life band.

“Back then we were just exploring,” says Rakel. “Anything could have happened,” adds Bella. “We didn’t have any expectations of what kind of music we wanted to make. [We] felt full of possibilities and we could’ve gone in many different directions. Now, I think there’s still flexibility and movement in what we do, but it’s a lot more refined. There’s a lot of power and momentum behind it.”

From the Beatles to Fear of Men, art schools have a knack for forming great bands – possibly even more than music colleges. Rakel feels that their beginnings gave the band a sense of freedom. “In art school, you’re always exploring. ‘No’ is not a word you use. I think it’s really beautiful that we did that because so many bands have really high expectations, and want to sound the best they can in the first three months, which is unrealistic.”

This process seems to have knitted the trio together. “We felt really free and liberated to find out what we wanted, and then we really went after that in a way none of us had before,” says Alice. “As a unit, there’s a solidarity where we support each other and discover things together.” A non-hierarchical, shared experience is important to the band; it is an attitude they say comes directly from art school. “We’d like [for] this band to be a collaboration with different mates of ours,” says Rakel. “It’s great to know there are people around you who want to support you creatively. In other bands
I’ve been in, it’s also been a really close-knit circle, but then with just one person making decisions. And then it becomes unnecessarily dramatic. This is a conversation, rather than one person saying: ‘This is what the music should be like.’”

Read more on Issue 1 of GIRL FIEND, which you can purchase here.